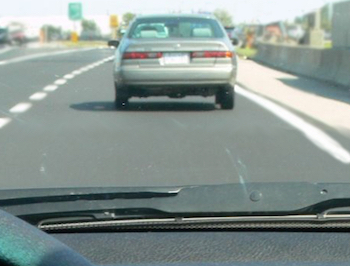 Oh come on! It’s a school zone when the lights are flashing or children are present, like the sign RIGHT IN FRONT OF YOU says. No lights, no kids—you don’t have to go twenty miles an hour NOW, you idiot.

Okay, we’re past the school zone…that means you can speed up. Damn it, don’t tell me you’re going to creep along all the way to the roundabout a quarter of a mile away. Why yes, yes you are. ’Cause none of the people in the six or seven cars behind you have anywhere to be, right? Thanks for being our pace car.

For chrissakes, you don’t have to stop at a crosswalk when there’s no one near it! I’ll bet you come to a complete stop at the traffic circle, too, even if it’s empty.

Ding, ding, ding—we have a winner! And you get extra points for unnecessary signaling. You kinda got my hopes up that you were actually going to turn right at the street there instead of just entering the roundabout.

Well, imagine that! You managed to exit the thing on the first try. Good job. Now you’re going to speed up, aren’t you? AREN’T YOU?!

Of course you’re headed to the same place I am. Why would I expect anything else? Be sure to go as slow as possible through the entire lot even though I can see two empty spots at the end of the row from here.

Ah, finally parked! If I hustle, I won’t be late.

“I’m looking for a seminar called ‘The Virtue of Patience: How to Slow Down in Today’s Hurry-up World’—do you happen to know what room it’s in?”

Yup, exactly the same place I’m headed. Great. “As a matter of fact, I do. Follow me.”

“I can assure you it hasn’t. I’m the instructor.”

When two young, moderately successful vaudeville performers teamed up for a comedy act in 1923, it didn’t take long to realize that they had found the right fit — both personally and professionally — and that their future success would be far beyond moderate. Together, George Burns and Gracie Allen, who married in 1926, formed one of the most popular and enduring comic duos in entertainment history.

Burns was largely responsible for creating the characters the couple played throughout their long career, which spanned vaudeville, movies, radio and television. He performed the straight man role in the routine to understated perfection, and always credited Gracie for the team’s popularity (although he deserved at least as much himself). Allen’s character was fashioned after what was known in vaudeville as a “Dumb Dora” act (named for the zany female protagonist in an early motion picture), but everyone, including the audience, knew it was just that: an act.

Although Burns and Allen stopped performing together with Gracie’s retirement in 1958 their smart and affectionate humor caught my attention some 20 years later, and I’ve been a fan ever since. This is my homage to them, an original radio skit set in the late 1940s, during the period when their weekly show was called “Maxwell House Coffee Time” after the sponsor.

Here, then, is “Gracie’s Collection.”

CAST
GRACIE: Gracie Allen, a seemingly scatterbrained woman who is, in fact, keenly intelligent and witty.

ANNOUNCER: Gracie will be heading out soon to a meeting of her women’s club, but wants to show her husband something before she departs…

GRACIE: George, look at this and tell me what you think.

GEORGE: I think I don’t know what I’m looking at.

GRACIE: It’s my new collection, silly. I’m going to enter it in the county fair next week.

GEORGE: This isn’t a collection, sweetheart, it’s just an odd assortment of items.

GRACIE: Yes, that’s right. My collections are known for their eclecticity.

GEORGE: Ah…eclecticity? Are you sure you don’t mean eccentricity?

GEORGE: No, I just meant that eclecticity isn’t a real word. Since you mentioned it, though, I’m not sure how a thimble, a bottle opener, a partly filled book of S&H Green Stamps, an old tobacco pipe, a necktie and an empty Maxwell House coffee tin can be considered a collection. A collection has to have a theme, a common bond.

GRACIE: It does! These are all items that were missing, but turned up while I was doing the spring cleaning.

GEORGE: I see. And what are you calling this collection?

GEORGE: Do you mean to say you named it after yourself?

GRACIE: Oh no, it’s named after the hymn. You know, “I once was lost, but now am found…”

GEORGE: So the theme is found objects. But what do you have to say about the fact that eclecticity is not a proper word?

GRACIE: Well, if it isn’t, it ought to be…just like the other “-icity” words.

GRACIE: It’s simple. The Electrolux is powered by…

GRACIE: Howard Hughes is in the news for his…

GRACIE: And my collection is known for its…

GRACIE: Who’s to say I can’t? Writers have made up words all through history. Chaucer did it, and Shakespeare did too.

GEORGE: Now, kid, I don’t mean to cause offense, but you’re no Chaucer or Shakespeare.

ANNOUNCER: Thanks for joining us, and until next time, remember — Maxwell House coffee is always good…to the last drop.